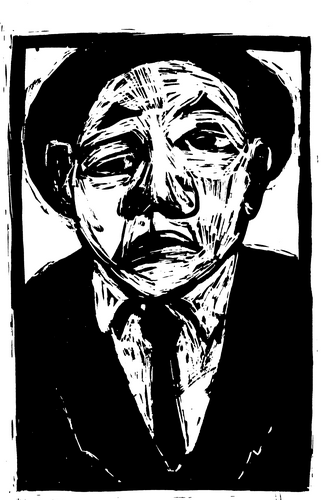 "We awaken in the poem. How did we come there? ...Indeed, we came there because the straight way was lost"

I'd like to try to write something about the ongoing story.  Of course it overlaps with stuff elsewhere on this website (for example, the part about New Klezmer Trio below is taken from my essay New Klezmer Trio and the Origins of Radical Jewish Culture) so if you're curious and have a minute please glance around.

My mother played the clarinet through college.  When I was little it was pretty much kept in a drawer, but I would ask her to take it out and play for me. It was an old Noblet.  I liked how it looked in the case, and the smell of old wood and cork grease, and I liked the sound.  In fourth grade when Dr. Willie Hill came around and asked who wanted to play an instrument, the Noblet became mine. (Mr. Hill wasn't a doctor then; he was travelling to six or seven elementary schools every week to teach band.  We were lucky to have him.)

So growing up in Denver I played clarinet in the public schools -- band, orchestra, and jazz band, and various city-wide and state-wide groups.

1. In Junior High School I was second clarinet in the band and sat next to the amazing Andy Stevens, whose father Jack Stevens was a fine local clarinet teacher (Bill Frisell studied clarinet with Jack around this time and gives him enormous credit for his musical development).  Andy at that age could make sounds on the clarinet that I had never imagined, so I was lucky that my idea of what "first chair clarinet" sounded like was based on someone who would go on to win the International High School Clarinet Competition in 1974 (I just found out that David Krakauer came in 2nd that year).  I started practicing to try to catch up, and never stopped.

2. My private clarinet teacher, Dr. Ramon Kireilis of the University of Denver, had the idea one year to invite the world's greatest clarinetists to Denver for a convention.  He let me tag along, so before I knew anything I was lurking around while folks like Ulysse Delecluse, Leon Russianoff, Gervase dePeyer, Mitchell Lurie, Elsa Ludwig-Verdehr, and my favorite,Yona Ettlinger (I was crazy about his recording of the Brahms Clarinet Quintet), gave lectures, master classes, and drank coffee.  This went on for a few years and eventually became the International Clarinet Association.

Back then if you wanted to be in the Stage (Jazz) Band, you had to take up the saxophone, so my dad went to the pawn shop and found an alto for like forty dollars.

During high school, I also spent two summers at the National Music Camp at Interlochen, Michigan.  That was a crazy place with so many unbelievably talented kids.  I studied clarinet with Sidney Forrest from the Peabody Conservatory and an amazing cat named Dave Sporny conducted the Jazz Band.  My second year there I resolved to practice eight hours every day; you could usually find me sitting on a chair in the field behind the practice rooms, day and night.  (I tried to continue this back in Denver during my senior year of high school, which necessitated getting up at 4 a.m. to start practicing.  A heartfelt thanks to the Kents who lived next door and never complained.)

My musical life was a dichotomy: I played jazz on the saxophone and classical music on the clarinet.

While getting a B.A. in music from the University of California at Santa Cruz I studied clarinet with Rosario Mazzeo, the dean of twentieth century clarinet teachers. I started playing and studying klezmer music, which has a virtuosic clarinet tradition. I began to think about how to use the clarinet in jazz and improvised music.

Once the task had been defined I looked for help. Steve Lacy provided a good example. He had devoted himself solely to the soprano saxophone and his music really touched me. I was playing in The Klezmorim and for some reason there were a bunch of tours in France that included hanging out for a week or two in Paris between gigs. I used to go down to the Sunset to listen to Steve and ask him for a lesson.  Finally he relented and said come over tomorrow.  He spent an afternoon with me and showed me specific methods of studying the fundamentals of intervals, harmony, and melody. I worked on these exercises for the next five years and began to gain access to the basic materials of music.

I was playing a lot of klezmer music, but getting tired of the search for “authenticity” through note-for-note reconstructions of old recordings. In Sweden I met Ziya Aytekin, a traditional zurna player from the Caucasus.  I heard how much his music had in common with, for example, the late work of John Coltrane. I wondered if I could use klezmer music to explore this connection between the traditional and the "avant-garde."

One day I got together with Dan Seamans and Kenny Wollesen, with whom I had often played traditional klezmer music. I suggested we take a familiar tune and cut loose on it to see where it might go. The result was exhilarating and had a powerful, lasting effect on me. It was my first taste of music as a transformative, liberating force.

This group became New Klezmer Trio. Playing new versions of traditional tunes and my own compositions, we toured between 1990 and 1995 and recorded three CDs, Masks and Faces, Melt Zonk Rewire, and Short for Something (all available on the Tzadik label). The group later reconvened with Greg Cohen on bass to play concerts in the US and Europe, and in 2009 we recorded a CD of my new compositions on Jewish themes, Speech Communication, a work in memory of my father, who had recently passed away.

Joe Lovano said that Mel Lewis could play a downbeat that was so strong it would last for eight bars.  Perhaps there are some downbeats that keep ringing for the rest of your life.  For me, New Klezmer Trio was this downbeat, a moment when the ingredients I had worked hard to prepare first came together in an experience that continues to illuminate the depth and range of musical possibility in this world.  This was the beginning of my creative musical path; in the years since then, I have continued to work with and cultivate the musical forces that were present at that time – research, education, musical fundamentals, diligence, attention to detail, and a relentless pursuit of truth.

My musical life has branched out in considerable ways since the time of New Klezmer Trio.  One thing that has remained consistent is the way projects arise in the service of inquiry.  New compositions, the development of my improvisational resources, important performances, educational efforts, and the creation of recordings all result from my efforts to understand something better or answer a question or problem that won’t let go of me.

For a discussion of the various projects that have arisen in this way that are significant to my work and my development as a composer and musician, please have a look at the Projects page.

I would like to say a few words about practice.  Not to try to write a treatise on the subject (who knows, that may come later), but to note a few influential discussions that became turning points in my attempts to become a more articulate and fluent melodic improvisor.

Steve Lacy suggested learning all the notes through a systematized and methodical study of intervals, at first outside of tonal context, then puzzling out the possible tonal contexts.  He said that he developed the idea from writings or comments by Stravinsky.

Joe Lovano suggested taking a chord sequence (for example the blues) and playing it in all twelve keys every day.  Eventually I stumbled upon a rubato approach -- playing in meter but not in tempo -- that allows time to stretch to accommodate my slow mind.

Ellery Eskelin pointed out that this, or any exercise, could be approached through the playing of whole notes (then half notes) so that tempo can be observed while not rushing the mind and fingers.

Somewhere along the way Charlie Hunter suggested at a clinic we were doing “put down the guitar and play drums for a year,” to strengthen the groove.  This led me to try to learn a way of playing drums and clarinet at the same time, so that the groove comes first.

EDUCATION AND PROJECTS WHICH HELPED MY MUSICAL DEVELOPMENT

In 1997 I received a Master of Arts degree in Music Composition from Mills College, where I studied musical analysis with David Bernstein, and composition with Alvin Curran, Pauline Oliveros, and Christian Wolff.

In 1992 I received a Jazz Study Grant from the National Endowment for the Arts which funded private study with the saxophonist Joe Lovano.

Two Jazz Performance Grants from the National Endowment for the Arts enabled  me to develop and present concert series that advanced my musical understanding.  In 1994 I presented a series of concerts focusing on the work of a particular composer: Thelonious Monk, Herbie Nichols, Steve Lacy, Bobby Bradford/John Carter, and Andrew Hill. I was fortunate to work with Mr. Bradford and Mr. Hill in concerts of their music in this series. A second grant, in 1996, allowed me to present a series of concerts of my own compositions.

In 1993 the guitarist John Schott and I began working on music of the bebop era -- Bud Powell, Dizzy Gillespie, and Charlie Parker. We soon found the songs transformed through elongation, repetition, dwelling, thickening the melody, and other approaches. The results are documented on the CD Junk Genius. Further study involved the post-serialist notion of combinatorial structures containing a specified number of notes. Working with four-note groups, we discovered transformations within a given structure and across structural forms. The results of this study are documented on the CD What Comes Before.

In 2004, after learning that Steve Lacy was ill, I began working on compositions dedicated to him. As Steve Lacy was my musical hero, I thought a lot about the nature of his influence on me and how I might separate my voice from the powerful effect of his. I convened a quintet (Carla Kihlstedt, violin; Rob Sudduth, saxophone; Devin Hoff, bass; Ches Smith, drums) to perform the pieces. The compositions were recorded shortly after Steve’s death and released in February 2006 on the CD the door, the hat, the chair, the fact (Cryptogrammophone).  Commenting on the CD on NPR’s Fresh Air, Kevin Whitehead said “all his music has one quality in common.  Call it ‘soul’.”

The music of Thelonious Monk has been central to my education and development. As with the European classical masters, the study of Monk’s music has taught me a lot. The more I play these songs, the more I see that each one contains a lesson – sometimes a lesson in harmony, sometimes melody, sometimes rhythm or phrasing – that forms the living core of the piece. The trio Plays Monk released a recording in 2007, and was listed in Downbeat Magazine’s critics’ poll in the category of Rising Star Ensemble.